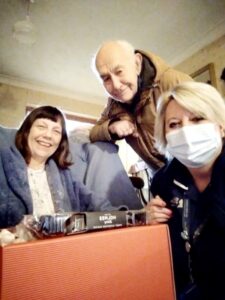 In the busy lead-up to Christmas, after another difficult year with the on-going pandemic and other challenges which we all faced in our day-to-day lives, here at Cavell Healthcare we decided to embrace the season of goodwill and so we launched a Christmas hamper give-away.

So as well as giving a hamper of festive goodies to every member of the Cavell Healthcare team, we also invited clients, staff and members of the public to vote for someone they felt was deserving of a special Christmas treat. Whether that was someone who deserved to be recognised for going above and beyond to look after the people in their lives, or someone who was perhaps lonely or struggling and needed some festive cheer. We didn’t set any limitations on the nominations other than we wanted to hear about local heroes whose every day acts of kindness might be deserving of an award.

To say we were overwhelmed with the response would be an understatement and we were moved by every single nomination.

Such as for mobile Hairdresser, Laura, who was put forward because of being “amazing in the community”. The person who nominated her stressed how much her clients love her and that she spreads joy and puts smiles on people’s faces wherever she goes; so they wanted to put a smile on her face and make her feel as special as she makes others feel. We hope we did just that when we presented her with her hamper.

There were also a number of nominations from our carers, who wanted to recognise people they look after. For example, Stephen, who had a difficult year following a personal loss, combined with ill health and another client, who never complains despite the daily challenges she faces.

Other nominations included two for a lovely individual who had a particularly challenging year due to the loss of a loved one, as well as a mum who wanted her two children to feel special following a family tragedy that has affected them all.

We also had some nominations from our own team, including Vicki and Rachel, who nominated co-worker Bev’s Mum. As Rachel said “she’s had a tough year and is always doing things to care for others.” It was lovely to be able to spoil her for once, with one of our hampers.

Finally, there were two nominations for the lovely Katie, who is described as going “above and beyond to help anyone” and who “always puts others before herself.”

Whilst we know that a hamper won’t fix the challenges many of these people faced during the course of last year, we hope that it brought a bit of a smile and some festive cheer at an otherwise challenging time!